my alter-ego, Jace Clayton, will be performing a free ‘special all-Cumbia set’ in Brooklyn a few Wednesdays from now. Gowanus guacharaca! September 16, Treehouse @ Littlefield. An all-cumbia set is the sort of thing that only makes sense in my hometown, so come on through…

Tune in Mudd Up! with DJ Rupture on WFMU 91.1fm tonight at 7PM, as Roberto Ernesto Gyemant aka DJ Beto, the man responsible for putting together those wonderful volumes of 1960s and ’70s “cumbia tropical & calypso funk” from Panama, joins me to talk and share some incredible music. He had a curatorial hand in Soundway Records Panama compilations and the Colombia! Golden Age of Discos Fuentes as well. Deep compilations with informative liner notes, the real deal…

Of course, for those outside our FM broadcast range, WFMU offers live streaming and even has its own free iPhone app!

We (Lamin & I) have been fascinated with the music of Panama ever since our visit from Wayne Marshall and Raquel Z Rivera, editors of the Reggaeton book, broke down Panama’s relationship to Jamaica with some deadly tunes and erudite commentary. (Missed it? It’s streaming here. Subscribe to the Mudd Up! podcast if you want downloadable versions of my weekly show:

And if that’s not enough, here’s great CD rip of old school cumbias – although you might not guess it from the cover art featuring two cyber chicks (one in cowhide) and Memin Pinguin [breakdown on this Mexican-concocted Sambo here]. [via]

Scratchy gems include a Vietnam-themed war/love song with a call-and-response chorus.

Back in 2003 I wrote an essay for The Wire’s ‘Epiphanies’ section. The piece detailed my high-school encounter with a bootleg cassette compilation of Japanese noise stitched together by RRRecords. It was published in their April issue (coverboys: Autechre). Here’s an except:

The RRR cassette was polarising, but it was also personal and fragile; and I had the sense that if I didn’t listen closely, it might pass unnoticed. I knew nothing about these groups, but it was obvious that an individual with photocopier access and a dual cassette deck could make a substantial difference in their world. This scene had a tangible scale. It stood within grasp, which suggested that I could actively participate in music – any music, especially the weird stuff – rather than remain a well-informed consumer.

…and here’s a PDF of the entire article.

I’m a bit too tired to narrativize my life, but the raw facts of the next five days are:

Today, this Friday, Dutty Artz goes to Boston: Jahdan Blakkamoore, Matt Shadetek, and I will be perform at the Institute of Contemporary Art’ s waterfront outside space, along with Nomo.

Then we gather up our dancing shoes and relocate to the incredible terrace of the Centro Cultural de Espana. I play around midnite maybe? CCE has a great soundsystem. Last time I DJed here things got crazy. We’re going for crazier. (It’s right around the corner from Zocalo, the plaza, notable for its ridiculously large national flag and the smell of frankincense.)

If you haven’t gone to Mexico City, you should… It’s the kind of place where (this happened to me) suddenly you find 12 people in the flat where you’re staying (you’ve invited them up, apparently) at 2 A.M. and one of them is putting together an Afrosound compilation and then you all decide to go eat and the place you arrive at used to be a Chinese restaurant, but that flopped so it turned into yet another Mexican restaurant serving Mexican food in Mexico (this is good thing), but they kept the intensely ‘Oriental’ decoration anyhow (reverse ethnic-ization?), and when you finally return to the apartment you find a freshly cut potato lying on the table. Not a whole potato, just a sliver cross-section. The apartment had had no food or knives in it. One of the girls must have done it but you have no idea which one, or why. Had she been carrying the potato all night? I ask B. to tell us a ghost story and she says “i have one but it’s true” and while she’s telling it A. falls asleep but I’m left up, awake (not for long, let’s face it), because the story was truly awful. I had asked for it.

As if to explain the potato slice & many other things, all of them in fact: “se ve cualquier cosa en Mexico” said my friend Symphony the next day, temporarily partially blind, before he stumbled out of the Tepito ceviche stand in search of a bus to take him home. Gender melt. Also, Mexico City is a nice place to get books in Spanish.

but back the schedule.

Tuesday finds me (celebrating my birthday) in Santiago de Chile, where Andy Moor & I will DJ the opening night of the Santiago International Film Festival. (Andy’s a great DJ!).

On Thursday at the same festival, I’ll be joining Fugazi’s Guy Picciotto, Andy, & T. Griffin, as we perform live music to a new Jem Cohen film, Mexico City By Chance. Jem has re-edited the material from our D.F. debut a few months back; this recent incarnation is looking lovely. There will be a workshop or talk as well, with Jem and some of the other musicians, but I will be flying back to D.F… to fly back to NYC… to fly to France… but more on that next week.

So. If I fall asleep while talking to you, you know not to be offended.

Before Gold Teeth Thief and Minesweeper Suite and Uproot and all of that, there was my 1st mixtape, 1 + 1 = 3.

Made in ‘The Toneburst era’ (late 90s Boston), recorded straight to cassette, and sold at our shows, 1 + 1 = 3 is a nice document of what I was up to about 11 years ago (arabic music, hiphop, dancehall, noise, xerox machines)

Wayne & Wax ups an excerpt and a fun interview with me about it. Check it out. He writes, “Even as 1 + 1 = 3 gives a sense of how much he has grown and morphed as a DJ, it still offers some recognizably rupturey maneuvers and seems to prefigure the strange melange of Gold Teeth Thief. Trad middle-eastern sounds meet modern beat science, from slurred boom-bap to minimal dancehall, rollicking jungle to proto-breakcore noise.”

It is strange for me to hear this mix now, in part because I can no longer ID all the tracks! I usually remember what the record artwork looks like, but sometimes the artist/label/track names have escaped me. And in part because my technical reach and narrative pace has expanded since then.

It also makes me think about how our whole way of finding (& mixing) music has changed in the past 10 years or so. When this mixtape came out, in order to get reggae and dancehall I had to trek across Boston’s segregated cityspace out to Blue Hill ave. in Dorchester. Pre MP3 smorgasbord, we would haunt the record shops & tape the radio. Learning paths through music pre-Google, pre-blogosphere, before Ms Internet + Mr MP3 got married and made us all their children.

When interviewers ask me some variation on ‘why Arabic/north African music?’ I tell them that I’ve been listening to it for as long as I can remember (I can only remember as far back as high school: pathetic, I know), that it’s as familiar to me as the other stuff I DJ. Which this excerpt — 9 minutes from the start of side B — illustrates.

And as for Toneburst, it was a Boston-area production crew, including folks like DJ C and myself. “the Toneburst Collective was a loose-knit crew of DJs, electronic musicians, and video-and installation-artists, who together produced approximately 20 large-scale multi-media events in offbeat locations around New England and New York. More carnival than rave or concert, the crew’s productions mixed experimental beats, video, and performance art in unorthodox spaces.” 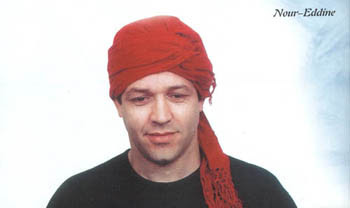 Literally minutes after my arrival in Mexico City this spring, we found ourselves in a packed restaurant with fluorescent lighting, and 3 flatscreen TVs all on the same channel. I was eating the best octopus taco I’d ever had. A wrinkled old man walked in, going from table to table carrying an ancient wooded box with ‘Toques’ engraved on it. Scrappy wires attached two metal rods to the box.

He was selling electric shocks. Apparently it’s something you do, sometimes, often when drunk: friends buy a ‘touch’ , hold hands, and everybody gets mildly electrocuted. About 10 minutes after he left a young woman comes in selling books of poetry. I’ve been plenty of places where someone comes in with their homemade chapbook, but she had ‘real’ books from a publishing house.

While neither vendedor ambulante made any sales (to my knowledge), at that moment I fell in love with D.F. Electric shocks and poetry. There has been no turning back. Out of all the places I have ever been to (many, trust me..) this is the place I’m most looking forward to return to.

So I’m pleased to announce that next Friday, I’ll be back in Mexico for a picnic…. “off- and on-line conversation about property, capital, and content, from the capital of chaos.” In this edition of ‘Theories of Chaos’, the invited speakers are Mariana Delgado of Proyecto Sonidero and myself – we’ll be talking about these issues in relation to our other love, cumbia. Needless to say, I’m super excited.

After the nocturnal picnic, we’ll head over to the Centro Cultural de Espana (this event is also free) where I’ll DJ their roofdeck party.

here’s a quiet, melodically intense old cumbia from Los Wawanco, an international assortment of musicians based in Argentina. 50 Years of Partying! announces their website.