Context — you bring the ropes, I’ll get some grease.

A violinist I met in Lima resurfaced at my last show in Philly — she’d been traveling the continent, music-theater as her passport; moving obscurely between swamp and river in Colombia she’d stumbled across this tune. Learning the sadness it framed was a heavy thing. As the liner notes explain, When a child dies in the Pacific, the belief is that the child is without sin, and ascends directly to heaven. Therefore, a childâ€™s funeral (chigualo) is marked by bittersweet celebration.

The darkness extends: soonafter they recorded this song the two youngest members of Grupo Naidy, brothers, were gunned down on a streetcorner as they left band practice. (Those guns were probably American). Every song is a story is a line you can hum, a book you can lose your page in, a map you can burn, a jungle hurtful or fertile depending on what you are when it grows around. 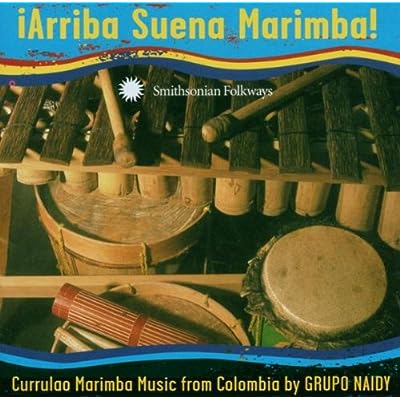 Released by Smithsonian Folkways, the album Â¡Arriba Suena Marimba!: Currulao Marimba Music from Colombia by Grupo Naidy is a treat. This melody appears twice, the second time with saintly adoration lyrics sung to the same notes. Let’s worship Saint Anthony!, go their raised voices. Some of the most amazing music has been made by deeply religious people (syncretic black Catholics, in this case; or maybe the ‘B’ should be capitalized and the ‘c’ should be lower-case). Music as a lean into the beyond.

You can download the album’s bilingual liner notes [PDF], chock-full of sturdy, sober information like: “The Afro-Pacific marimba consists of as many as 24 chonta-wood keys, suspended over bamboo resonators and arranged in local tunings outside the notes of the Western scale” and “As a boy, Saxo was more interested in playing soccer than in the folkloric music of the Pacific coast, until all his friends started going to a school for folkloric dance and music in his neighborhood.”

In just a few days I leave New York City for a season. Beyond Digital in Casablanca, then shows in Poland, Denmark, Italy, and I think Croatia… But there’s one last event to shake things up in NYC before I go: a concert at 92Y Tribeca.

This Saturday will be Nettle’s last stateside show until our new album comes out this fall. (Details on the album soooon). We’ll be performing with Debo Band, an Ethiopian group based in Boston who I’d heard about via mutual friends for awhile; and Alsarah & the Nubatones, a Brooklyn-based Nubian soul crew. (Nubian like Ali Hassan Kuban, whose song is still up.) I’m excited!

A brand new tune from Damas Gratis arrived in my inbox direct from Pablo Lescano last week. And it’s awesome.

“La 3ra del Borracho”, a thematic appetizer for their upcoming album Esquivando El Exito, is a song about appetite and excess (“but I only had five glasses of red!”), institutionalization’s passivity vs. the self-guiding twitch of compulsion. Classic accordeon and horn lines sort their way around catchy, acidic keytar melodies, all chorused up with a reggaetonesque appeal to pa’tras pa’tras as the narrator escapes from the doctor to end up with a piba on the dancefloor, grinding against the wall.

I also appreciate the way Lescano flips cumbia’s convention of calling a followup/response song ‘2nda’ etc. so that, here, it edges into relapse, repetition…

In other news, the Kumbia Queers just dropped a video, “Celosa,” from their Pablo Lescano-produced album, La Gran Estafa del Tropipunk, which brings in the reggaeton-edge more explicitly. Who cares about your glitz and glamor or your video’s cinematography/after effects budget/set design; the Kumbia Queers are awesome: radical and inclusive and punk in a way that makes those three tired words mean something again. And that is the big picture uniting both Damas Gratis and Kumbia Queers — they ‘sidestep success’ (esquivar el exito) by ignoring standard ideas about beauty and propriety to successfully create their own worlds, unprecedented before they arrived, now thriving such that the (cumbia) mainstream bends towards them, as it should…

you can subscribe to the Mudd Up! podcast for downloadable versions, issued a week after FM broadcast:

Mudd Up! RSS. Also useful: WFMUâ€™s free iPhone app. We also have a version for Android (search for “WFMU” in the marketplace).

To everyone who supported WFMU by pledging for my DJ Premium a few months back: good news, it will arrive shortly if it hasn’t already! 3.5 hours of choice Maghrebi sounds, After Tropical Comes Arid; your generosity was the only way to get it.

and I nearly forgot to up the stream from last week’s show:

END_OF_DOCUMENT_TOKEN_TO_BE_REPLACED

Yesterday my friend visiting from Paris complained that all her friends here are raging alcoholics — she’d forgotten the desperate bent to good times in NYC. Here’s some sweet hangover soul restoration music from Afrolatin Via Kinshasa, a 2 CD compilation featuring Congolese guitars, Africans singing in Spanish, lots of Franco, etc. The liner notes are information-rich, but since I’m time-starved I haven’t had a chance to absorb their discussion of Cuban music’s influence (via sailors) in Kinshasa and beyond. But it sure sounds good:

Now back to the music of pots & pans across Spain. #SpanishRevolution

The idea is simple: every six weeks or so we gather somewhere for informal talk centered around a good muddy book, then go eat delicious food. We’ll have a live Ustream feed so Cousin Internet and Miss Larry Antitroll can participate.

The inaugural edition will convene on a Casablanca rooftop, around late afternoon/sunset, about six weeks from now. Tea will be served; pastilla Ø¨Ø³Ø·ÙŠÙ„Ø© afterward — all you need to do is read the book.

Our selection: Maureen F. McHugh’s Nekropolis, a science fiction novel set in 22nd century Morocco involving biochemical slavery, immigration, genetic chimeras, and — last but not least — a new mode of sexuality. All written by a white American lady who has never set foot in Morocco! (And it shows, but that’s OK. Just don’t tell her that Fez doesn’t really have a necropolis) There’s more to say, but I’ll wait for the roof. (Thanks to Anne ‘Odalisqued‘ Boyer for the for the head’s up.)

Speaking of modulated Moroccan futures… here’s a now-thing chaabi stormer I bought in the big Casablanca souq — a bit further in I saw an Auto-tune hardware rack unit for sale! The song comes from fantastic recent varietes chaabia compilation CD Nojoum Wislane. I’ll write more about this CD later — it features a new development in Auto-Tune… — once I’m there I’ll be able to get sleuthy with the info. But for now, enjoy, this is very much what’s bumping in the Casa street these days:
[audio:https://negrophonic.com/mp3/Mudd Unknown track 1.mp3]

On Monday, May 16th, I will participate in a panel discussion at Google’s NYC office. Topic?

You guessed it: thee Musick Industrie.

It’s not open to the public –but I’m allowed to bring a small posse, and our discussion will viewable online as part of their GoogleTalks series.

So if you are interested and available next Monday (things begin around noon), email me or leave a comment below (with your email), I’ll get in touch if there’s space.

And remember: secret google cheat codes are real – but don’t bother Googling it.

We’re been putting a lot of work into preparing for the June stretch of Beyond Digital, when our team of eight people (and rising!) will converge in Casablanca, Moroccoâ€¦ Website coming soon, along with a proper update.

But for now: part one of the Beyond Digital Summer Reading List! An outpost of the Dutty Artz/Mudd Up Book Club. I’ve been asked a few times for some BD related texts, so here you go: a handful of books I’ve read recently that struck chords with how I’ve been thinking about BD, in one way or another.

The best article on Auto-Tune or your money back… Carolyn (Beyond Digital’s Paris point person, who’ll be joining us in Casa) just conducted a video interview with Moroccan producer Wary, who makes an appearance here.

Yes, the “French science fiction writer” from Hennesey Youngman’s hilarious video. This book is cool though. St. Nic is all about translation. We’re into it. (So is Michael Larson.) Bourriaud writes: “Translation may represent that ‘basic ethical effort’ that has been mistakenly associated with recognition of the other as such. For translation always implies adapting the meaning of a proposition, enabling it to pass from one code to another, which implies a mastery of both languages but also implies that neither is self-evident.” The Radicant is a slim book (perfect for the subway), which explains why I can’t find it right now. Probably on my desk. . .

“As a critical methodology, multiculturalism resembles a system for distributing meaning that assigns individuals to their social demands, reduces their being to their identity, and repatriates all meaning toward an origin regarded as a political revealer. It is this critical model that is in crisis today, this multiculturalist version of cultural diversity that must be placed in question, not in favor of a systematic universalism or a new modernist Esperanto, but rather in the context of a new modern moment based on generalized translation, the form of wandering, an ethics of precariousness, and a heterochronic vision of history.â€

This is a novelization of Allouache’s Bab El-Oued City film. It’s not great — it’s not even set in Morocco — but hey, how you gonna be mad at a novel that opens with the theft of a mosque’s loudspeaker (a handsome young baker throws it into the sea) and chronicles its impact on a working class Maghrebi neighborhood? Allouache sketches a social realist panorama, with a subplot involving romance novel smuggling.

Coming in Part Two: one of the best books about music, ever (hint: Umm); non-annoying non-Beat avant-garde lit about the aftermath of a terrorist bombing written by an expat in Marrakesh; sci-fi set in Fez dealing with biological slavery and a new mode of sexuality; Appadurai’s ethnoscapes, and more…

In the meantime, some heat from the first volume of DJ Amine’s Maghreb Mix Party series:

I was semi-delirious during last night’s radio show, but I hope you can’t tell… Kicked things off with new material by the Durutti Column and floated upwards from there. Subtext: listening to the silences between Buenaventura Durrutti and Downliners Sekt. Three cheers for Spanish anarchists & their spiritual children.

In fact, it’s worth quoting Downliners Sekt talking about the Portbou train station . Where European infrastructure standards conflict with Spanish ones â€“ but what the passengers get is pure existential pause-button edits. I know that station well, and love the idea of music visions & postrave oblivion flowing from it.

FACT:Where does your name come from?

Downliners Sekt: â€œWell, originally it was a 1956 song called â€˜Down The Lineâ€™ by Roy Orbison [also covered by Jerry Lee Lewis], then eventually used and modified by an obscure British band as Downliners Sect. We sampled the name from them because we thought it sounded great. Also, it has a special meaning that connects all of us to Portbou. Portbou is a train station that gets you in a really weird mood especially if you happen to stop there after raving â€œunder the spinning lightsâ€ of Barcelona clubs all weekend. This place has a very Twin Peaks oppressive atmosphere. Itâ€™s the changing point between Spanish and French railway networks, and once you get there everything slows down for the customs check between borders. Because since 1845 the Iberian railway gauge has been 233 millimeters wider that the European gauge, the train has to undergo a break-of-gauge before crossing the border. It feels like time stands still in the town and Portbou, almost imperceptibly, shrinks by 233 millimeters. The sect of ravers trapped in oblivion, â€œdown the lineâ€ in Portbou. Since then, when we feel a bit down, we kindly use the expression: â€œen descente de Portbouâ€ â€” which means â€œgoing down the line from Portbou.â€

tracklist from May 9, 2011 Mudd Up! END_OF_DOCUMENT_TOKEN_TO_BE_REPLACED